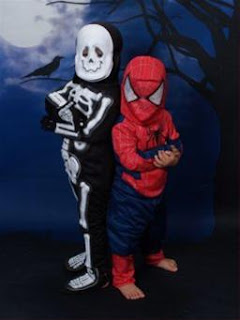 It was October 31, 2008, two weeks before K's 4th birthday. This day had been long-awaited as the kids would finally be able to sport their super-cool costumes to the world. It was also the first time experiencing Halloween in our new neighborhood.

We started our trick-or-treating at the local strip mall. After about an hour, the kids were starting to get restless.  K asked, "Mom, can I eat a piece of candy now?" This was the third time he had asked me after I had said no to him twice. Upon realizing that he had been so good, I felt that he deserved a treat this time.

He had taken a piece of candy out of his bag and peeled off the foil wrapper when I wasn't looking even though I had instructed him not to unwrap anything. What could one expect from a tired little guy who had been resisting these treats for a whole hour? I was happy he at least asked me before popping it into his mouth. I had noticed an eyeball painted on the already crumpled foil, but it just appeared to be a ball of chocolate.

Prior to this day, any ball of chocolate I had ever eaten was either solid or embedded only with rice crispies and trust me, I'd had my share. So based on my experience, I was confident that it didn't contain peanuts and deemed it perfectly safe for him to eat. I mean it obviously wasn't a peanut butter cup, or a Snickers bar, or Peanut M&Ms, Butterfinger, or Pay Day. It was just a generic ball of chocolate. How harmful could it be? And so I gave him the okay to eat it and said, "That's it. And don't unwrap any more candy." He enjoyed it with a look of curiosity, but big smile on his face. Later I would find out that that K's look of curiosity was also a look of unfamiliarity.  He was tasting something new.
Our last stop was Jimbo's, a health food store, where they were handing out twisted fruit treats. It was a healthy treat, so I figured why not? I let K eat it. We hopped back in the minivan and headed straight home, a 5-minute drive, to have dinner before we would start our neighborhood round of trick-or-treating.

As soon as we pulled into our garage, K started to sneeze a lot. Wayne and I were completed dumbfounded as to what could have been causing this uncontrollable series of sneezes. I automatically thought that he was just getting sick. Maybe I had him walk too much, he must be coming down with a cold...but so suddenly? It was sneeze after sneeze after sneeze unlike anything we had ever seen. After about five minutes the sneezes subsided but next came the intense coughing. As a mom who likes to stay on schedule, I proceeded to give him some water and began feeding him dinner anyway. I just thought that he was getting sick and if I downed enough nutrition on him, maybe he could shake this one off.

As the seconds passed, K became more irritable and out of sorts. He could hardly talk, but he was still breathing...with apparent difficulty. Our hearts were racing. My husband and I began to question what he could have eaten besides the fruit twist that could have triggered this reaction. I knew I was overprotective of what he ate. But in a state of panic, my memory failed me as I didn't even recall that he had the chocolate ball.  (Was I so overconfident in its safety that it had slipped my mind?) The phone was in hand, I was ready to dial 911 while my husband, who is medical doctor, tried to think of all the possible potential differential diagnoses. Meanwhile, my son was kicking and crying in discomfort, looking as red as can be.

We finally concluded that this could be an allergic reaction (but to what? the fruit twist that contained sugar and fruit?) so we gave K Benadryl. That was our most potent allergy weapon at the time. My husband then examined K's body.  He lifted his shirt to find hives laden all across his chest , torso, and groin area. The pieces were coming together. Finally, a light bulb went off in my head. I remembered the chocolate ball K had eaten 20 minutes earlier. I immediately phoned my sister who was at the same mall trick-or-treating with her kids earlier that day and asked her to dig into their bags and find a chocolate ball wrapped in foil with an eyeball painted on it. She found it. I asked her if there were any words on it and after a close look, she finally told me, "It says peanut butter."

My jaw dropped. I was completely floored, not to mention paralyzed by fear and anger toward myself and maybe even toward the candy company. I must have been the most guilt-ridden mama that had ever existed on the planet Earth.

After what seemed like hours but was actually 30-40 minutes, K's hives finally disappeared.  He was back to looking and feeling completely normal. Meanwhile I couldn't even comprehend what had just occurred in an hour's span. By the miracle of Benadryl my son was alive and okay.

Even after the incident, we still wanted K to experience the fun of trick-or-treating, something he had been anticipating for months. In a great overcompensating effort to put a smile on his face that we felt was the least we could do, we allowed him to go through the motions of trick-or-treating on our street but without touching any candy whatsoever. (Trust me, he didn't want to anyway.) He came home happy and full of smiles, and ready to go to sleep. For the first time ever I was scared of a Halloween costume, that of my son's which was a skeleton. I couldn't avoid pondering about the irony of it all. What a close call. And I had never been so cognizant of the first word in "trick-or-treat" until this night. In fact, it rang horror to my ears because, clearly, that year I was tricked, not by some ghoulish monster but by the evolution of candy...at the expense of my son. How to describe this Halloween is beyond spooky. 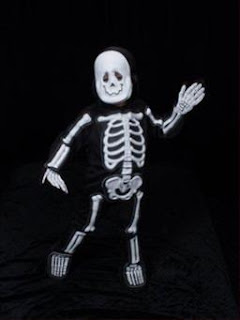 We called K's doctor and we were advised to come in first thing Monday morning to see him. Needless to say, I could not sleep that night, or for the next couple nights for that matter. I walked into my son's room while he was sleeping and laid down beside him. Still haunted by that evening's chain of events, thoughts of worry still ran through my head. What if he has another reaction overnight and I'm not there? What if Benadryl doesn't work on him the second time around?

On this quiet night, my ears had never been so sensitive. Every single soft breath he took seemed to fill my heart with an astounding joy and relief that I needed. Earlier he had been gasping for breaths and now I was gasping for his. They were effortless this time and medicating to me. I shed tears of sadness for what could have been.

I also shed tears of joy because in my eyes, K was reborn that night. He was given a second chance. I put my arm around him and held him as tight as I could thanking the Almighty above. I vowed never to get mad at my son again…for anything!! Well, we all know how that panned out, but boy, was I a changed person. From that moment on, I would never look at food in the same light again.
Posted by Michelle K. at 9:00 AM