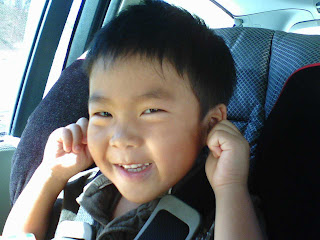 Part 1 THE FIRST CLUE
We had always suspected that he our first son, K, might have a food allergy. He had a history of pretty moderate to severe eczema as an infant. At the time, there was so much literature on peanut allergies it was natural for us to decide that we would watch out for that one with K.

For the first three years of life, we decided to hold off on peanuts. At the end of his third year, our normally reluctant eater became more adventurous and open to trying new foods. We wanted to take advantage of this opportunity and felt it was an appropriate time to introduce new foods and flavors to his palate, including peanuts.

One day at a birthday party, among the snacks was a peanut butter granola bar so we had him try it and sure enough he broke out with a couple of hives around his mouth. I could count how many there were. He showed no signs of difficulty breathing or discomfort at all. It was a mild reaction, but that experience confirmed our suspicion nevertheless. Mind you, neither my husband or I have a family history of food allergies so it was difficult for us to understand the seriousness of the situation. With that said, we didn't even bother getting it confirmed with his pediatrician. We figured we'll just avoid peanuts from then on. And we did.

By the age of 3, K understood that he was allergic to peanuts. He was even keen enough to inform his preschool teacher that he couldn't eat one of the provided snacks in class since it had peanuts (even though I had indicated it on the registration forms). It came natural to him, much to my relief, to protect himself. So when the teacher asked me about this, I answered, "Well, it hasn't been diagnosed by a doctor yet, but we pretty much know he's allergic so we are avoiding peanuts altogether." I proceeded to tell her, "I actually wrote it on his emergency card."

This would be the first interaction I had with any teacher regarding my son's suspected peanut allergies that would help me realize my son's uniqueness. It was the moment that propelled me forward to start thinking about how I should manage his presumed food allergy. Where do I start and when? My son's birthday is coming up in a couple weeks, he has a well visit with his doctor, I'll just consult him about it then.

In retrospect, my main concerns seemed to be focused more on how this allergy would impact my son emotionally. How is it going to make him feel when everyone else gets to share the same snack except for him? Will he feel left out? Is this going to affect his self-esteem? It wouldn't be until later that I would realize the true implications of having a food allergy and the physical impact that an allergen could have on an allergic child.
To be continued...
Posted by Michelle K. at 10:00 AM