We hope you all had a safe and fun Halloween!  Worried that you won't have the willpower to resist the kids' nutty Halloween loot?  Can't think of what to do with a stash of unsafe or unwanted candy?  Bring your candy and a gently used children's book to this Sunday's Food Allergies Rock event and trade them in for a new-to-you book!

El Dia de los Muertos, or Day of the Dead, is a Mexican tradition typically celebrated at the end of October and beginning of November.  In Mexican culture, it is strongly believed that death is simply a transition from one life to the next.  Remembering the deceased is not viewed with fear, sadness, or horror.  The living have big celebrations for the dead during El Dia de los Muertos.

Families make an ofrenda, or altar, for their departed loved ones.  The ofrenda is often multi-tiered and decorated with flowers (usually marigolds), candles, plates of breads and candies, photos, and trinkets that are particularly significant to the departed loved one.

This fall my eldest, Ryken, started in a Spanish dual immersion school and roughly three-quarters of his friends are of Mexican descent.  We also experienced a loss in the family over the summer that Ryken and Callan continue to mention in their unending curiosity and attempts to make sense of mortality.  I thought that making an altar would be a meaningful activity for the whole family.  The idea of fostering connections with loved ones who have passed and taking time each year to remember their lives are valuable across cultures and generations.

There were two elements of the ofrenda (altar) that I focused on: sugar skulls and Pan de Muerto (Bread of the Dead). 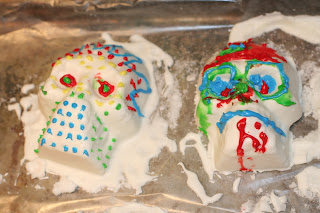 Sugar skulls (not safe for egg-allergic)
Sugar skulls are made of sugar, meringue powder (made with dry egg whites), and a small amount of water.  The trick is to mix a little water with the sugar and meringue powder to create a wet-sand consistency, which will dry and harden.  After hours of hardening in the molds, the skulls can be removed and hollowed out (a step I skipped because mine were too delicate).  Front and back of the skull are stuck together and covered with royal icing which hardens into a smooth white finish.  Dyed royal icing is typically used to decorate the skulls.  I took a simpler route and bought tubes of icing writer for decorating.

The skull-making process is long but kid-friendly and fun.  For our busy schedule, it took a few days to complete the project.  The most challenging part of getting the right consistency for the sugar mixture.  I think mine was a little dry so when it was time to hollow out the skulls, they began to crumble in my hands.  My runner-up challenge was resisting the urge to stop the project as chunks of sugar flew through the air while my kids excitedly helped with mixing.

Pan de Muerto is a yeast bread made with milk, eggs, anise seeds, and sugar.  It is brushed with a sweet orange glaze following baking.  I wanted to make a milk-free, egg-free bread to make the bread more allergy-friendly.  I made substitutions to a recipe found on All Recipes.com. I ended up making it anise-free too out of necessity (I didn't have any!) and my boys enjoyed it.  I used white whole wheat flour and found the bread to be a bit dense so I would recommend using all-purpose flour or a favorite gluten-free flour blend.

The first time I baked these, I followed the 35-45 minutes baking time and burnt my breads.  I had to throw out everything.  I recommend checking your bread frequently starting at 20 minutes. 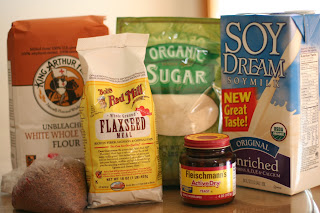 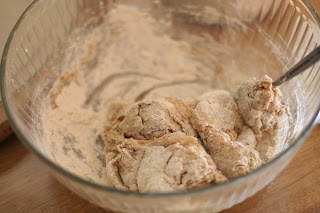 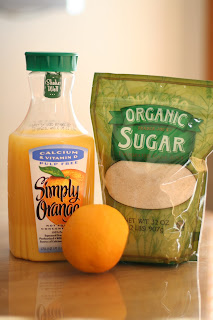 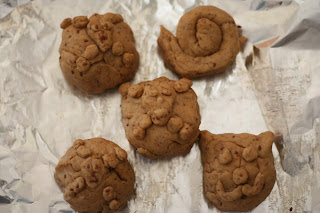 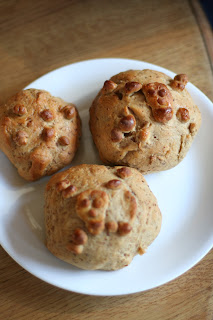 Hope this encourages you to take time to reflect on your lost loved ones.  If you celebrated El Dia de Los Muertos this week, share with us a photo of your ofrenda!

Email ThisBlogThis!Share to TwitterShare to FacebookShare to Pinterest
Labels: holiday