My eldest son, Ryken, has been obsessed with soy ice cream ever since his first bite at 2 years of age.  It never fails: at the first hint of warm weather he proclaims, "Today is a good day for soy ice cream!"  Sunny or not, the kid can't go three weeks without mentioning it in conversation.

Recently on my local mothers' club message board, someone inquired about ice cream makers.  This piqued my curiosity.  I had never owned one or thought about owning one but it sounded easy to use.  And it made a lot of sense.  Summers are blazing hot in my neighborhood and dairy-free, nut-free ice cream is expensive and often hard to find.  After reading moms' reviews and reviews on Amazon.com, I became convinced that a Cuisinart ice cream maker was a great investment.

I started using our ice cream maker two weeks ago and have already made 9 batches of ice cream.  Our family hasn't finished all the ice cream but we are stockpiling different flavors in the freezer.  I've become obsessed with trying out recipes!   The Cuisinart is so easy to use and clean, and can be ready to go every 8-24 hours depending on how cold your freezer is.

So far I have searched for "vegan ice cream recipes" and found a lot out there.  I've played around with 6 different recipes: vanilla, chocolate chai, cherry chocolate chip, banana chip, coffee, and mint kale chip.  You heard me right.  Kale.

The first recipe I tried was chocolate chai ice cream from Cathe Olson's vegan ice cream book Lick It.  I followed it to a tee and it was a big hit!  I was worried that the chai would be too spicy for my kids but they loved it.  The spices added a little kick of flavor and the coconut milk was really key to the rich creamy taste.  Many of Olson's recipes use coconut milk so if you are in the market for dairy-free, soy-free recipes, definitely consider this book. 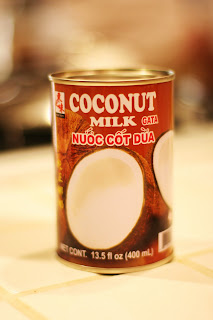 I followed the cherry ice cream and banana ice cream recipes pretty closely except I used a mix of soy creamer and soy milk to bump up the fat content, and I did add semisweet chocolate chips.  I really liked the cherry flavor although I think the thinner chocolate shavings would be better than chips.

I tried a vegan vanilla that I found on Vegweb.  For the nondairy milk I used my soy milk of choice, Soy Dream Original.  I let Ryken, whose favorite ice cream is vanilla, be the final judge of the ice cream -- and he loved it!  He declared it every bit as good as the vanilla soy ice cream we've bought from Trader Joe's in the past.  I thought it could use a richer texture so I have made a point to use coconut milk next time. 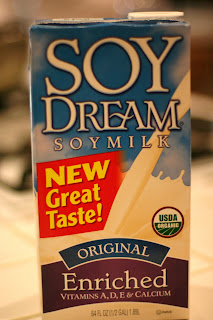 Below are two recipes that I adapted using more coconut milk than soy milk.  The texture of all of these recipes is best when it's just been churned.  They harden when stored in the freezer and will definitely need time to defrost before you serve.  I've read that the vegan way to improve the texture is to add a couple tablespoons of arrowroot powder (you'll have to dissolve it in heated liquid).  Since I couldn't find arrowroot in any stores and I wasn't ready to commit to 3 lbs of the stuff from Amazon.com (or its $23 price tag) I did without it.

Coffee Ice Cream
No other ice cream flavor makes me happy like coffee ice cream.  This one isn't great for the kids because of the caffeine but mama's gotta treat herself goood sometimes, right? 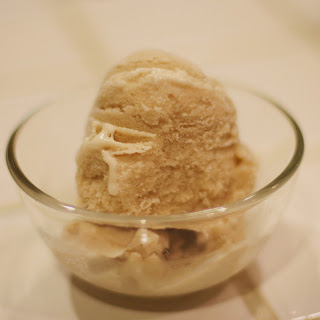 Adapted from Rae912's submission to Food.com


Mint Kale Chip
I know what you're thinking:  Kale...ICE CREAM?!?  That was my first thought, too.  My second thought was, I MUST TRY THAT.  Part of the allure is trying a new way to get my kids (especially Callan) to eat more leafy greens.  The other draw is the sheer strangeness of it all.  Bay Area folks, if you have ventured to Gilroy's Garlic Festival for garlic ice cream, this is right up your alley.

Ice cream tip: Always taste your mixture before you transform it into ice cream.  Not all milk alterrnatives are created equal -- some have more sugar than others or more of a vanilla slant.  Your mixture is essentially melted ice cream and, as such, should taste just as good!

I *think* all these recipes can be made gluten-free but please check all ingredients yourself.  (Sorry.  Summer break.  Kids at home.  Heat wave.  Chaos.  Exhaustion.)  All in all, I think I was most impressed by the chocolate chai and coffee flavors.  I am definitely sold on using a can of coconut milk to serve as 2 cups of milk alternative.  Ryken didn't like the mint kale chip (no fooling him) but Callan was all over it.  Perhaps he hasn't had a long enough relationship with dairy-free ice cream to want to refuse any of it?  No matter to me.  I was happy that he ate it all up without complaint.
Posted by Irene C. at 9:00 AM