Many parents struggle to get their kids to eat vegetables.  I am one of them.

In recent years my eldest, Ryken, has gotten a little more adventurous and mature about trying more vegetables for the sake of good health.  My youngest, Callan, is a tougher kid to convince.  If you had asked me six months ago what vegetables Callan eats (besides the ones I finely chop and hide in dumplings, noodle dishes, and soups), I could count them on one hand: potatoes, yams, and corn.

So you can imagine how excited I am to tell you that Callan has added two vegetables to his repertoire!  One is broccoli, which seemed inevitable since we eat a lot of it in this house.  The other is brussel sprouts.  Yes, you read right.  Brussel sprouts. 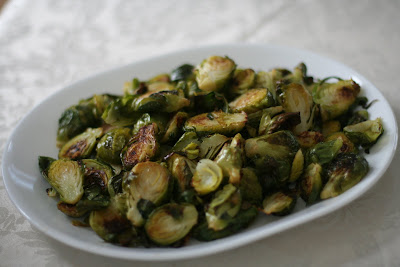 I myself didn't grow up eating brussel sprouts but I often heard how horrible they were from fictional books and TV shows.  The unflattering depictions did not inspire me to run out to the store and try them, that's for sure.  Then last winter I tried them for the first time when my visiting mother-in-law made them.  Whoa.  It was then I understood the smell and bitterness that people complained about.

Flash forward a couple months later.  I had made some roasted vegetables for my brother-in-law and he asked if I had ever tried roasting brussel sprouts.  He had become a big fan of them recently and made them often.   I hadn't ever tried but figured if my brother-in-law raved about them, it was worth a try.

My brother-in-law makes them with some balsamic vinegar.  I tried that a couple times but after the lukewarm response from my kids, I decided to go without.  Not only did I like the brussel sprouts but Ryken and Callan liked them, too.  They liked them so much they were fighting over the leftovers the next day.  At breakfast.

I used JAGATAC's recipe found on AllRecipes.com.  While I haven't changed the ingredients, I do prep the sprouts a little differently and my cooking time is shorter.