Corn and Chickpea Chowder -- hearty bowls of goodness, free of the top 8!

Ahhh...February.  Busy days, cold nights, and Super Bowl Sunday.  All perfect excuses to bust out the slow cooker and get my soup on! 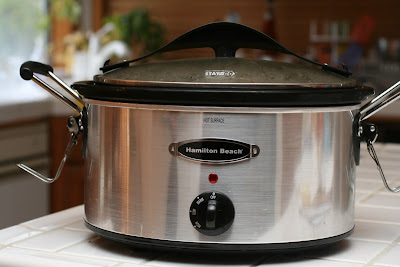 When my family lived a short time in Seattle, we loved visiting Pike Place Market on the weekends.  If you aren't familiar with Pike Place Market, it's a public market overlooking the waterfront that houses local merchants, crafts and farmer's markets.  You can find stands making hot donuts, vibrant freshly cut flowers, retro toys from your youth, and huge fish being hurled through the air.  The market itself is surrounded by a neighborhood that boasts the original Starbucks and other small businesses.  It's a charming, warm place with  lots of yummy options, too!

One of my family's favorite spots near the market was Pike Place Chowder.  In addition to seafood chowders and bisques, Pike Place Chowder was also creator of a very popular vegan chowder.  The chowder was so rich and creamy, it was hard to believe it was dairy-free.  I remember asking and, um, re-asking (excessive but c'mon -- I've got a milk-allergic boy!) to make sure that there was absolutely no milk, no cream, no butter, no dairy of any kind in the soup.  Nope.  None of it.

I miss that chowder and a bunch of other things about living in Seattle but, make no mistake, I am thrilled to be a Californian again.  I'm grateful for having sun and warmth most all year long.  The nights have been getting chilly around here, though, and it reminded me of the warm bread bowls of vegan chowder.  I decided to try to recreate the chowder experience in a safe way for my milk-allergic, nut-allergic kids.  This recipe is also free of wheat (gluten), soy, and animal products -- in other words, it's completely devoid of the top 8 allergens.

I tried a couple different chowder recipes including one from The Post Punk Kitchen's Isa Chandra Moskowitz from her cookbook Vegan with a Vengeance.  If you are managing milk and/or egg allergies or simply want to bring more veggies into your meals, do yourself a favor and check out Isa's cookbooks!  Her recipes are fairly simple.  They focus on plants, beans, herbs, and spices and the results are delicious.  In terms of the chowder, Isa's wasn't as creamy as Pike Place Chowder's so I played with the liquids.  I used coconut milk to build up the richness.  I also threw in more vegetables and garbanzo beans for more flavor, texture, and added nutrition.  The results were delicious!  You could even replace more vegetable broth with coconut milk to make the soup creamier if you don't mind the extra fat.  (My poor hips do...)

Don't be scared off by the lengthy list of ingredients.  It's an easy soup to prep for the slow cooker (took me about 15 minutes) and the beauty is, when you get home at the end of the day, it will practically be ready to serve!  If you don't have a slow cooker, you can toss everything into a big pot and simmer for 45 minutes or so.  For extra flavor, you can saute the vegetables prior to cooking the soup with the liquids but this will add to your clean-up and cooking times.  For thicker soup, omit one cup of vegetable broth.


The soup is a hearty meal on its own but having it with some bready loveliness really hits the spot.  Perhaps serving it in a sourdough bread bowl or with toasted slices of your favorite safe bread?  I myself have recently become obsessed with sweet potato drop biscuits from Moskowitz's Appetite for Reduction low-fat vegan cookbook.  I made the biscuits half a dozen times last month including once with a gluten-free flour blend that seemed to work okay.  A little gummy, but I think I added a bit too much xanthan gum.  Again, another cookbook to buy or check out at your local library!