Superbowl Sunday is coming up!  Whether or not your favorite team made it to the bowl or even if you're not big on football, Superbowl is still a good excuse for an afternoon of snacking, silly commercials, and just plain being happy with friends and family.

I was searching the internet for game day snack ideas when I came upon this football stadium built of junk food on HolyTaco.com.

This thing was seriously a work of art.  I was completely blown away by the cleverness and level of detail even if I was kinda disgusted at the same time.  (See the Twinkie-bacon grandstands.)  Read the entire hilarious post at HolyTaco and you too will be just as conflicted as my mind and arteries.

While HolyTaco's stadium was over the top with junk food, it gave me the inspiration to try my hand at creating my own snack stadium. 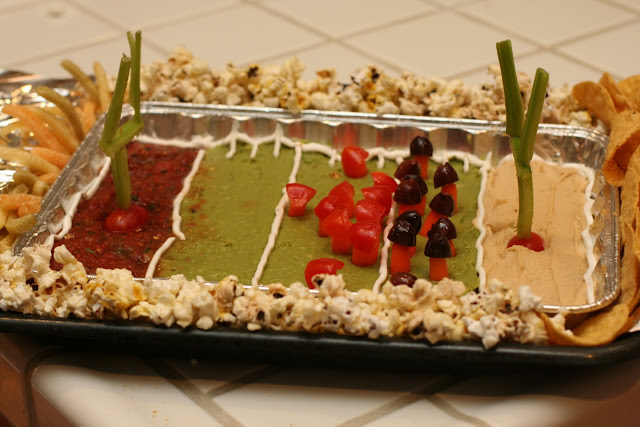 Because of my kids' food allergies, I had to substitute some of the original ingredients for safe foods.  I also replaced some of the heavily processed foods and meat products with healthier choices.  The stadium I made was milk-free and nut-free.  Some of the snack chips do contain gluten or soy but you can use your favorite safe snacks instead.  Tofutti's Sour Supreme imitation sour cream contains soy and, according to their website, may contain traces of gluten from the manufacturing of the added flavors.

Below are the ingredients that I used.   While I often like to make homemade guacamole and hummus, I bought ready-to-serve stuff from Trader Joe's to build the stadium.  The Trader Joe's guacamole has a smoother consistency than my homemade guacamole, and that worked well for the football field although next time I'll mash in a couple more avocados to make the field thicker for holding the carrots.  Definitely have extra guac or avocados on hand.  If you are having a huge party, definitely double the recipe and use a deeper pan.


You'll see in the photos that I used salsa in one of my end zones.  Logistics-wise, this wasn't successful as it was too thin to support the celery goal post.  In my recipe, I suggest using refried beans instead.  Also, try anchoring each goal post into a chunk of tofu or cheese to offer even more stability.  And jicama might be an easier food to work with than celery so I included a mention of that in the post.

Stadium and fans:
A pan or box a little wider all around than the pan used for the field
Your choice of safe snacks - I used popcorn, tortilla chips, and Trader Joe's Veggie Sticks (contains wheat starch)
Enjoy your Super snacks! 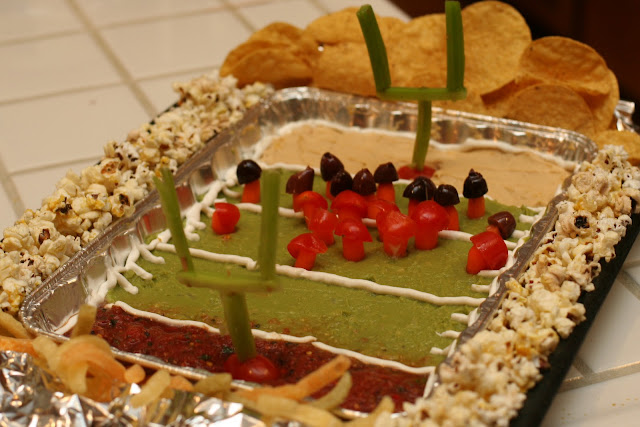 As you can see, I didn't attempt to construct the grandstands.  Truth be told, it was the afternoon before our Chinese New Year feast and I didn't want to spoil our appetites on snacks!  If you are planning a huge party and want to build out your stadium the way that HolyTaco.com did, think about using your favorite hot dogs and safe buns to recreate the Twinkie tiered seating.  I'm thinking a perimeter of homemade tamales or hot dogs -- single layer for the lower grandstand and and skewer-connected, double-stacked tamales or hot dogs for the higher level.  Milton's Gourmet White is a milk-free bun (contains wheat, soy).  Udi's Gluten-Free sells gluten-free, milk-free hot dog buns (contain eggs).

I had a lot of fun making the stadium.  It's too bad we have no plans for Superbowl Sunday and no TV reception (we got rid of cable service and have lived off Hulu.com years ago) or else I'd love to do this again and built out the stadium even more.

Send us your photos of your game day spread!  Or better yet, join us on our Facebook page and share your photos on our wall!
Posted by Irene C. at 9:30 AM