Donuts! The search for the perfect baked treat...

So I finally gave into temptation this month and purchased two pans for baking donuts.  I've been thinking about it for a while and seeing Facebook posts about donuts from local allergy-friendly bakeries such as Miglet's Bakery and Zest Bakery piqued my interest even more.  Half-price heart-shaped donut pans at Jo-Ann's Crafts finally broke my resolve not to indulge in this treat.  Readers, remember my New Year's resolution to cut back on the sweets?  With all these desserts and this February sunshine, those new year promises seem a million years ago... 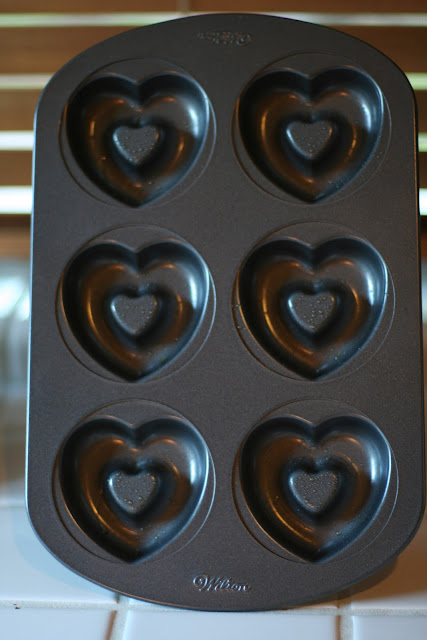 I have never made donuts and had never tasted a baked one for that matter.  So this was brand new territory for me and I didn't know what to expect.  I tried four recipes in my search for something that was not only tasty but reminiscent of the taste of a true donut without the milk, eggs, and loads of extra oil and fat.  Then I made a fifth batch of donuts that was a hybrid of the others.  Somehow I am able to still fit into my pants...

The Lindsay Nixon's recipe appealed to me because there was chocolate involved.  Plus, it called for whole wheat flour (which I had) and proclaimed itself low fat.  As my husband would tell you, it definitely had that "healthy" taste to it.  It was dense but not very chocolaty or rich.  These were our least favorites.

The second recipe from Ryan's Baking Blog substituted ground flaxseed and water for egg.  I liked the hint of nutmeg and was a big fan of the refreshing tang of the lemon icing.  Instead of using all-purpose flour I used a mix of all-purpose flour and white whole wheat flour.  The texture wasn't quite for me (might have been the white whole wheat flour) as it was a little too dense.

The third recipe, featured on Bon Appetit's blog in April 2011, was for plain cake donuts.  The recipe comes from Erin McKenna, who founded the trailblazing gluten-free, wheat-free, vegan bakery Babycakes NYC. The cake donut is one of many in her cookbook Babycakes Covers the Classics.  With Babycakes good name and the gluten-free/wheat-free option, I was excited to try the recipe.  But I was skeptical as to whether there was a misprint in the ingredients list.  "1/4 cup of vanilla extract."  Holy cow.  I've never used that much vanilla extract in one sitting!  The whole time I was making and baking these, I kept second-guessing myself about adding so much vanilla.

GAW friends, I'm happy to report that the donuts came out delicious!  Having so much vanilla actually helped the donuts come out a little crispy on the outside while the inside was nice and fluffy.  These donuts tasted even better after spending some time in the refrigerator overnight.  The next day I let the container of donuts come to room temperature before serving.  The only change I will make for next time is to shorten the overall baking time, fill my pans a little more, and try adding 1/4 teaspoon each of little nutmeg and cinnamon in the batter.  I think the nutmeg taste, in particular, definitely conjures up real fried donuts.

I was pretty happy with the Babycakes donut recipe but decided to press on and try another.  I utilized Cybele Pascal's recipe for gluten-free vegan baked donuts for my fourth and fifth test batches of donuts.  Cybele Pascal is a beacon of light in the food allergy world.  She bakes up recipes that are free of the top 8 food allergens.  I have been told by two moms of kids with multiple food allergies that Pascal's The Allergen-Free Baker's Handbook is a must-have.

My fourth batch strictly followed Pascal's recipe.  In my fifth batch I substituted coconut oil for the shortening and reduced the sugar by about 25 percent. Both batches tasted great and the fourth try was my husband's favorites.  To be fair, he has been traveling for work and only sampled a 3-day-old donut from the Babycakes trial and hasn't yet tried the fifth batch.  My brother-in-law did happen to visit the day after the Babycakes batch and loved them.  And my kids?  They also enjoyed the gluten-free donuts better than the wheaty ones.

Below are the recipes for my favorite combination -- Erin McKenna's donuts and Ryan's lemony icing.  I was able to get by with only a half-batch of the icing so you may want to start with that amount.  Please remember to check if your sugars are vegan if you want a truly animal-free donut.  In also included pictures from all the donut trials.  Icing and decorating the donuts are fun steps to get your little bakers involved.  I've hyperlinked the recipes I tried out.  Let me know which one was your family's favorite!