We've had an extended summer here in my neck of the woods.  After temperatures soared into the 90s on and off throughout September, we finally got rain on the first of October.  Goodbye, Indian Summer, and welcome, Fall!
Fall is a great season for the senses: the vibrant and changing colors of the trees; crisp cool air sneaking under your collar; dried leaves crunching under your shoes; apples, pumpkins, and knobby gourds in practically every color of the rainbow; and the distinct smell of squashes and spices cooking in the kitchen.

One of my favorite Fall smells is baked butternut squash.  So warm and inviting!  And with its rich flavor and bright orange hue it makes for a hearty and beautiful soup.  Buying butternut squash at my local Trader Joe's for less than $2 also makes for a very affordable meal!

I recently made butternut squash soup in two different ways, both free of seven of the eight most common allergens (it had soy from the Earth Balance).  One was a dairy-free version (subbing Earth Balance in place of butter and omitting heavy cream) of a bisque recipe I've used at Thanksgiving.  Later in the week I made a different butternut squash soup with the kids in my son's preschool.  This recipe had a few more vegetables and chicken broth.  While both soups were tasty, the second soup was over-the-top divine!

Instead of cooking your squash on the stovetop, cut your butternut squash in half lengthwise and bake it cut-side down at 400F for 35-45 minutes (time varies with the size of the squash), or until a knife can easily pierce it.  Do try to prevent overbaking and take it out before it becomes too soggy and loses its flavor.  Also, if chicken is something you eat, try using chicken broth or stock instead of vegetable broth.  You'll love the flavor that it adds to your soup. 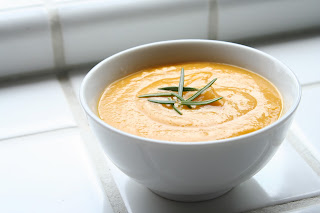 The soup went over about as well as you can imagine with a school full of preschoolers -- some loved it, some ate one spoonful and didn't want anymore, and some couldn't be convinced to try it.  I guess butternut squash soup is no exception to the "kids-will-need-to-try-a-new-food-multiple-times-before-they-like-it" rule.  I have to say, though, that the recipe was a huge hit among all the teachers and volunteering parents.  One week after its debut and three of the seven adults there that day had gone home and made batches of their own!

For the non-adventurous, non-vegetable eaters in your family, make trying the soup more appealing by tossing it with your pasta of choice or making safe garlic bread to go with it.  Hopefully after a few tastes, your kids will take to this vitamin-rich Fall treat!

Speaking of Fall treats...we've got one for you on November 6th!

Bring your families to Get Allergy Wise's "Food Allergies Rock" event with special guest food allergy musician Kyle Dine.  Enjoy great music, learn about local and national allergy-friendly businesses,  enter to win some fabulous prizes, and bring in your unsafe or unwanted candy and a gently used children's book in exchange for a "new-to-you" book!

Did we mention this event is nut-free and free-free?  What are you waiting for?  RSVP at our event page today!
Posted by Irene C. at 10:00 AM