We went camping for a few days in Yosemite National Park.  Growing up, Yosemite was a must-do trip for my family every summer when I was a kid but I hadn't been there as an adult in over a decade.  I was excited to take in the beautiful surroundings and experience it with my kids the first time. 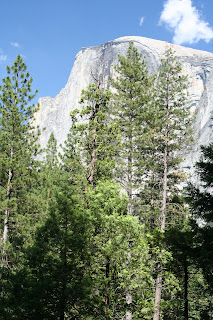 Yosemite is awesome but probably like any mom of a food-allergic kid, I was bogged down with anxiety before and during the trip.  Sharing food with non-allergic relatives, the great outdoors with its nutty, chocolaty trail mixes and the promise of no cell reception made for a risky situation.  I was extra vigilant about checking labels, washing or wiping down Ryken's hands and had to remind him more than once not to accept snacks - though allergy-safe - from cousins who had just finished peanutty, milky meals.  I had reprimanded my husband who allowed Ryken to eat a piece of salami without checking the ingredient label.  Ryken complained of a hot, itchy tongue minutes later (we gave him Benadryl immediately which helped) and a stomach ache.  A week later in the grocery store, we saw that the salami did contain dairy.

Despite being on high-alert for food allergies and bugging my family about food safety, on our last morning before heading home, I made a big mistake: while reading an ingredient label for an energy bar called Aussie Bites, I completely skipped the line about the "unsalted butter" in it!

My boys' reactions were unexpected.  In fact, they had no reaction whatsoever.  I hadn't realized my oversight until 8 hours later when I was about to give them more bites and re-checked the label out of habit.

I was horrified and stunned, as much by my mistake as by how we were able to avoid total disaster.  My mind was swirling with frightening images of what could have happened and the realization that Ryken had eaten dairy in a baked good for the first time ever and was totally fine.  In that jumble of emotion I barely registered relief that both kids were okay or hope that there are some ways they can consume dairy.

Now that I've had more time to reflect about our camping weekend, I'm grateful for what I have learned or been reminded of:

(1)  Always take time to read through the ingredients whether it be a new food or one you get every week.  You never know when ingredients may change as Sarah has mentioned in a previous post.  I think I need to physically put my finger on the label and read word-for-word as this is the second time I've overlooked an allergen while reviewing a label.
(2)  Don't give your food-allergic kids something to eat unless you can confirm exactly what's in it.
(3)  Always be prepared with your medication.  We had an error of judgment and an oversight.  My husband reassures me that we were prepared for the worst with our bottles or Benadryl and two sets of Epi-Pens.
(4)  On a personal level, we learned that Callan also has a contact allergy to milk (poor thing broke out in hives after being splashed by an exploding Frappuccino); a hot, itchy tongue and stomachache are becoming more common symptoms for Ryken; and the boys might be able to tolerate milk products in baked goods.  I don't have any plans to give the kids dairy-laden treats in the near future but will be fascinated to hear our allergist's take on this.

Email ThisBlogThis!Share to TwitterShare to FacebookShare to Pinterest
Labels: education