HAPPY FOOD ALLERGY AWARENESS WEEK!  In honor of this week, try a new allergy-friendly recipe that can be used for parties, play dates, or an extra special lunch packed with your favorite vegetables:

And so the challenge of getting kids to eat their veggies continues...

Inspiration came from discovering the pita pockets at Trader Joe’s, and realizing that the kind of dry, crusty pita bread I remembered from childhood were no longer.  These were really soft with a little chewiness, and the sesame seeds added a bit of nuttiness (without the nuts).  Oooh…I feel a veggie moment coming on…

I had also picked up  Tofutti Sour Supreme (Better than Sour Cream) at Thom’s on Geary Blvd. in San Francisco.  I thought I’d give it a try.

We made these veggie pita pockets for lunch--and the results?  Addison’s fell apart pretty early on (her two-year-old hands didn’t really understand how to best keep a pita together) so she ended up spooning out the quinoa and eating that.  (She had been stealing the heirloom tomatoes off the cutting board while I was preparing lunch, so I guess she still got her share of veggies). 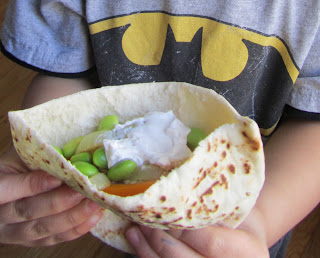 Logan ate almost two pockets filled to the brim with quinoa and veggies, and commented on how much he liked the sour cream topping.  Yes, he had a pretty big dollop--more like a glob!

When Tristan got home from school, he ate a pocket with his choice as his snack—just onions and bell peppers, no quinoa.  (By the way, I don’t think I’ve ever seen him eat a bell pepper before then.)  Based on pretty decent results, I decided I was definitely going to add this one to my lunch repertoire.

Letting the kids pick their fillers allowed them to take ownership, and eat more!  If you only have healthy options, you’ll all be happy.  Try adding meat, tofu, fish, and substituting in your kids’ favorite veggies.

tomatoes cut up into bite size pieces (if you get small grape, heirloom, or similar tomatoes, cutting will be minimal)

Tofutti Sour Supreme (If soy-allergic, omit this or use another safe sour cream)

3 pita pockets, sliced in half

1. Start by boiling the chicken broth and margarine.  Add quinoa, reboil, cover and lower heat (very low heat so as not to burn!) to a simmer for about 15 minutes.  Check after about 12 minutes and add liquid if needed.
2. While the quinoa is cooking, cut up all your veggies.
3. Saute the peppers and onions in a preheated pan with oil on medium heat until soft.
4. Once everything else is ready, pop the pita bread into the microwave for about 15 seconds to warm.
5. Let the kids pick their fillers, and enjoy!

We made about 6 pockets, and had leftover veggies to mix with quinoa and eat later--make more veggies and have enough for a full quinoa dish, or a quinoa & veggie soup--just add broth.  Quinoa and veggie salad can be eaten straight out of the fridge--add some crumbly cheese, fresh mozzarella, soy cheese, or other safe cheese...delish!
Posted by Sarah C. at 9:00 AM