How Did You Know?

Sarah's note: Jenn is a friend I've known since high school.  She grew up in the Bay Area, but relocated to D.C. where she lives with her husband and two (incredibly cute!) children, Bailey & Rowan.

Both of my children have food allergies. One of the questions I'm asked most frequently is: How did you know they have allergies? 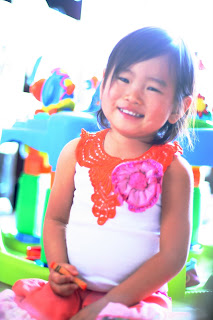 When our daughter, Bailey, was born almost three years ago, we were blessed with a lovely little creature who did all the things a healthy baby was supposed to do: eat, poop, spit up, poop, sleep, poop, and so on... Just a few short weeks into her new life, Bailey began doing something which she shouldn't have been doing quite so often: vomiting.

I was so sad to see my tiny child heaving and bringing up what seemed like a whole meal about once a day. I was afraid to nurse her, which is a terrible fear to have! She was still happy though it all, but the mommy instinct in me knew something was wrong. My sister in law had experience with food allergies and suggested that we should look into that.

I scoured the internet for more information and still felt unsure. Bailey didn't have bloody stool, nor was she having any problems gaining weight and growing. However, along with the vomit, she did have eczema on her cheeks. Our pediatrician also wasn't convinced and thought the eczema could have resulted from the severe east coast winter weather. She said it wouldn't hurt to try limiting my diet anyway, and my sister in law suggested that I keep a food diary and track Bailey's reactions to nursing based on that diary. I just couldn't wait that long and decided to put myself on an elimination diet. Basically, I cut all egg, dairy, wheat and soy from my diet. This is extreme, as it would have been easier to just cut one thing at a time to see what was the culprit, but I felt that I needed to help my precious child fast!

I read a few articles that allergens are NOT passed from a mother to her child through her milk - articles written by pediatricians, not JoeSchmoedia - but I felt that I needed to at least try anyway, regardless of experts' opinions. Immediately the vomiting stopped. Success! Joy!

When we finally got her tested by an allergist after she turned one (they wouldn't take her any younger than that), we confirmed by both skin pricks and blood tests that Bailey was indeed allergic to egg, dairy, wheat and soy. We had her tested again after she turned two, and we were happy to find that she had outgrown all of those allergies. However, we found that she did not outgrow her peanut allergy. We were prescribed an EpiPen and sent on our way. After avoiding all those other ingredients for two years, dealing with a "mere" peanut allergy felt like it would be a breeze. We were also tackling our next allergy challenge at this point: little brother Rowan. 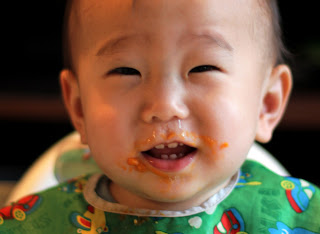 While pregnant with Rowan - even before he was born - I tried to avoid the foods Bailey was allergic to in hopes that Ro would then not suffer from the same allergies. My sister-in-law did the same thing with her second child, and she was successful in her endeavors.

We approached Rowan's diet cautiously but hopefully. He also suffered from dry skin patches on his cheeks, but that was once again during the winter. I thought I noticed a correlation between my diet and his skin, but I also thought I might have been imagining things. We were happy because he was a healthy, joyful boy. But then we switched to formula, and some problems began. His dry skin got worse, and then he got sick. It seemed to be the basic winter cold, but his runny nose and hacking cough lasted over a month. And he got periodic mucus in his stool, which is a sign of allergies.

That's when I remembered something I learned about hypoallergenic baby formula (more to come on this in a later post), and I switched from powered formula to ready-to-feed. Soon after that, he got over his "cold" and has been healthy and happy since. What I've learned is that I should always listen to the mommy instinct in me. If something doesn't feel quite right, that's probably because it isn't. The good news is, we all have support from groups like this one to help us get through it all.
Posted by jennipah at 9:00 AM