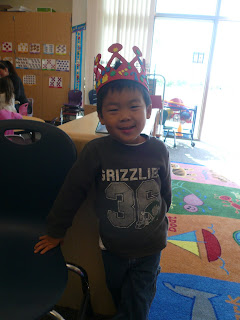 Part 3 BECOMING ALLERGY-WISE
Halloween was on a weekend that year so we went to the doctor's office first thing Monday morning. He took a blood test and told us that his reaction to peanuts was off the charts. We then decided to make an appointment with an allergist to get a more thorough evaluation. There it was confirmed that he was allergic not just to peanuts, but to many other allergens such as seafood and other tree nuts but, again, peanuts were off the charts. We also finally became acquainted with the Epipen. After describing all the symptoms that K experienced on Halloween, the allergist told us what we already knew, that we were very lucky.
Our house is now completely peanut-free and nobody is allowed to bring in peanuts or peanut-containing food from outside. I also gave up peanuts even though peanut butter was one of my favorite eats of all time. Even so, it was the easiest thing to do and I never looked back.
Even though Halloween lands in October I felt compelled to tell this story now. I believe it's a story for all seasons. Following are some tips that will help you avoid a situation like mine.

1) Familiarize yourself with signs of an anaphylactic shock.
2) When in doubt call 911!
3) Never assume that peanut-free candies you used to eat a long time ago are still peanut-free. New candies are being fabricated as we speak. They even put peanut butter in candy sticks now. What?? Familiarize yourself with peanut-filled candies and foods, especially the new ones. A simple Google search on peanut-filled candy will lead you to them.
4) If you suspect that your child has a peanut allergy or any food allergy for that matter, seek a thorough allergy work-up ASAP in case you need to be properly equipped with the right medications.
Posted by Michelle K. at 9:30 AM