Homemade Chicken Pho--Free of the Top 8

Boo...I've seemed to have contracted a stomach bug that latched on at around 1 am, and is relentless.  Argh.  Even more reason to get some extra sleep this weekend.

With this crazy weather we've had for the past week, 70's blue sky, followed by days of 50's high temps, in combination with this weak stomach, I decided to try out my cousin's chicken pho recipe.  My latest obsession, chicken pho from Turtle Tower, has been my go-to take-out meal for the past several months.  Delicious broth, slippery rice noodles, juicy chicken, topped with cilantro, green onions, and bean sprouts...how can you go wrong?

Well, the fact remains that most Asian restaurants in the City cook with MSG.  Once, I had dared ask a server at a local Vietnamese restaurant if their pho had MSG, and he responded with a chuckle, "Of course."  OK not so bad once in a while unless your daughter drinks pho broth through a straw and calls it a meal.

Ky-Yen's brother, Ky-Wai, passed this recipe along to her and it is apparently a fan favorite at his house among his triplets.  Yes, I said triplets.  Not only that, Ky-Wai is a classically trained chef.

How can you not try this recipe?

It's a very easy recipe, with the hardest part being finding the MSG-free pho spice bag that Ky-Yen uses in the recipe.  I checked a few Clement St. shops, and they didn't have it (or at least I didn't see it), so I ventured across the park to Sunset Super on Irving St. to find it.  I am wondering if they also carry it at the bigger Asian markets like 99 Ranch.

Here is, simply, the recipe Ky-Yen sent me.  Mine is cooking on the stove right now, and I must say, it smells authentically Vietnamese in our house right now.  Aw yeah.  Would be perfect with Irene's latest find from TJ's--fresh rice noodles. 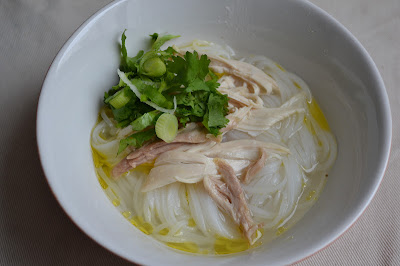 1. Cook the broth ingredients for 1 hour in a large pot.

2. Drain, and set aside chicken on a plate, saving the broth in the pot.  Compost the spice bag, garlic, ginger, scallion, and onion.
3. Finish with salt and fish sauce (omit fish sauce if allergic)
4. Cook noodles according to bag directions.  I used fresh pho noodles, but there are lots of alternatives based on taste and allergies.
5. Shred chicken meat.
6. Add noodles, broth, and shredded chicken to a bowl.  Garnish with desired toppings, like bean sprouts, chopped cilantro and scallions, Thai basil, lemon juice, and sliced and seeded jalapenos.

Hoping everyone had a relaxing Labor Day weekend!  Back to the grind...