(Sorry in advance for the very poor picture quality as I only had my phone with me!)

I've probably lost sleep with a mixture of anxiety and anticipation over Addi's egg challenge.  When she was around 15 months old, a skin test showed Addi with an egg allergy.  Only by accident did I realize that she had successfully eaten on several occasions foods that likely contained egg white (Chinese fish balls) at a cafe where we ate on a weekly basis.  At her two year visit, together with the allergist, we decided we would challenge Addi with egg.

The egg challenge consisted of a two-and-a-half hour block of time in the allergist office, a bag full of toys, markers, and stickers, an egg cooked omelet-style, and her favorite princess fork.  Her allergist initially fed her what amounted to little more than a crumb-sized portion of egg, then proceeded to feed her larger and larger amounts a total of six times, about every 15 minutes, until she had eaten a good adult sized bite.

So for the next few hours, Addi read all her books, 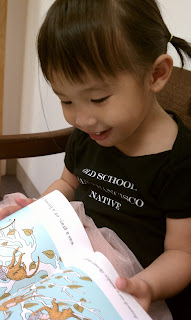 played with the toys from the toy basket, 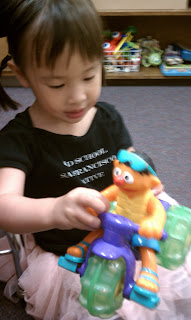 chatted with her friends on the phone, 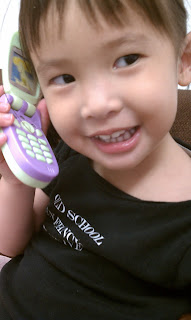 and played doctor (I just realized I've been walking around with a Phineas and Ferb bandaid on my sleeve all day!). 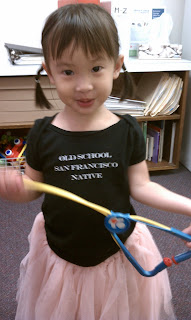 The result?  She was happy throughout the visit (ok, I didn't show you the pics from the last 15 minutes where stir-craziness started to set in and she was rolling around on the floor), and apparently she is a huge fan of egg.  A little redness around the mouth, with a few prickly marks, which didn't develop or worsen.  So, although there is still some ambiguity, I am relieved to know that she is able to tolerate at least some egg.  Her allergist instructed me to give her some egg over the next few days and see how she does.

Perhaps she grew out of her egg allergy?  Or did her skin test show a false positive?  We may never know...

Wow.  A little weight just lifted off of me.  A little, but still.  I'll keep you posted.

Oh, and here she is with her reward for all that waiting around.  Her very own coffee cup filled with water alongside a cheese and tomato sandwich.  And for me, a much needed tall soy white mocha with light whip.  Perfect. 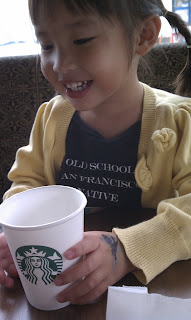