I was shopping at my neighborhood Trader Joe's yesterday when, what did my wandering eyes see? 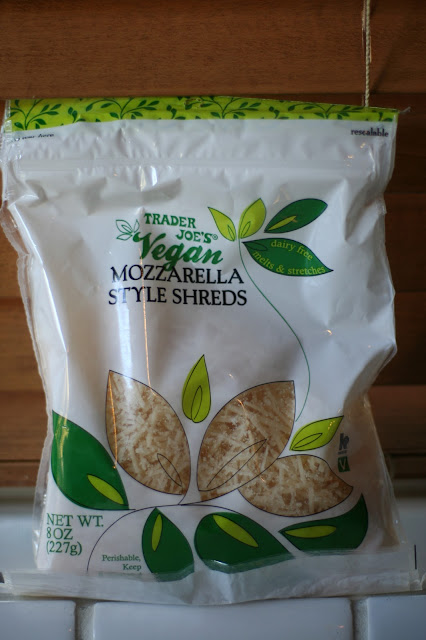 I had hoped and asked through the company's online product comment form for Trader Joe's to start carrying vegan cheese.  (I hoped that other like-minded folks were doing the same from their home computers, too!)  Now, I realize that there is already an excellent vegan cheese substitute on the market.  I don't think it would be exaggerating if I said that Daiya has revolutionized the vegan and allergic worlds with its completely milk-free, top 8-free cheese substitutes.  It tastes great and it melts.  In my inquiries to Trader Joe's about vegan cheese, I specifically mentioned Daiya by name as a product that the company should consider offering. 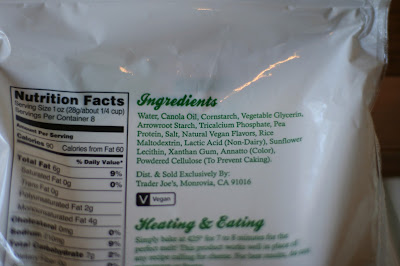 General observations about TJ's shreds:  The shreds are thinner, drier, and more translucent than Daiya shreds.  They kind of reminded me of parmesan shreds.  TJ's mozzarella shreds come in a convenient resealable package, an improvement over Daiya's packaging.  To me at least, TJ's shreds smelled like real cheese when I first opened the package, so much so that I momentarily got a little nervous about serving it to my kids.  (I admit, I reread the ingredients after the smell check!)  I mention the scent because I have read that some people really do not like the smell of uncooked Daiya. 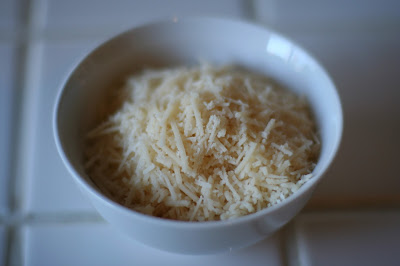 I decided to test-drive TJ's shreds on some homemade pizza.  I made a barbecue pizza and a sauceless vegetable pizza using Trader Joe's fresh, whole wheat pizza dough.  If your family is okay with wheat and gluten, TJ's pizza dough is a great option for tasty, thin crust pizza.  I baked the pizzas according to the dough directions.  I took the pizzas out when the crusts were golden around the edges at around 11 minutes. 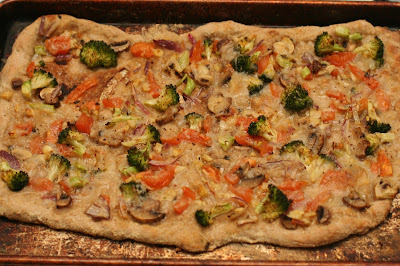 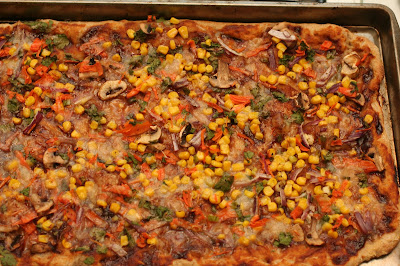 TJ's shreds melted completely.  They melted well -- almost too well -- it was hard to tell that there was vegan cheese on the pizza.  It was definitely on the gooey side taking on a sheen like glazed donuts.  It would be nice to have a more whitish look to the cheese like real mozzarella but what I really cared about was the taste.  Would it be a worthy substitute for the real thing?

TJ's shreds were pretty good. They had a nice flavor that tasted more like the real thing to me than Daiya.  After my second time of making pizza with TJ's shreds, I did detect a slight powdery aftertaste.  I'd say texture-wise, TJ's shreds are on one end of the spectrum and Daiya is on the other, with real mozzarella shreds right in the middle.  Daiya melts and stretches to a point but not as readily as real cheese.  TJ's shreds melt more than real cheese would.  Beyond taste and texture I was ecstatic to see that TJ's vegan shreds are fortified with calcium.  They provide 25% of the RDA for calcium per 1 oz (about 1/4 cup) serving.  Daiya Vegan Shreds provide a mere 2% of the RDA for calcium.

With a very good taste, meltability, calcium-richness, and competitive pricing, I definitely recommend Trader Joe's vegan shreds to anyone who is looking for a milk-free mozzarella substitute.  Daiya's growing product line (including vegan pepperjack and cheddar shreds, wedges, and spreads) is still a lifeline for cheese-longing vegans and individuals with milk allergies.  I do love their products but I will now buy my mozzarella shreds exclusively from Trader Joe's.  What's more, I hope my frequent purchases will keep vegan shreds on the shelf and encourage Trader Joe's to expand their vegan cheese products to more flavors.