Superbowl Sunday is almost upon us and for folks here in the San Francisco Bay Area, it's an especially exciting one.  THE 49ERS ARE IN IT TO WIN IT!

Sarah, who is a native San Franciscan, is a huge Niners fan.  And me?  Fair-weather fan here.  My husband is a huge Redskins fan having been raised near the national's capital.  Naturally, our stats-obsessed eldest son is now a huge Redskins lover as well.  But we are getting behind our hometown team, enjoying the scarlet red and gold banners around town, and loving an excuse for co-hosting a fun and allergy-friendly Superbowl party.

Among other snacks, I've decided to make some soup for the big game.  I know, I know.  Soup is not the first thing you think of when you are thinking football.  But San Francisco is famous for its sourdough bread and if you have been visited here before, chances are you have indulged in warm chowder in a bread bowl as you gazed across the Bay in search of the Golden Gate Bridge.  (Again, if you've visited here before, you know that the often fog-filled skies do require you to do some searching!)

Preparation is fairly simple and there are so many options that are free of the top 8 allergens.  Because of the handy slow cooker, you can prepare this ahead of time and transport it if you are going as a guest to a party and therefore have a hearty and safe option for a meal.  The soup can easily be dressed up to represent the scarlet and red colors of the 49ers or the purple, black, metallic gold, and white colors of the Ravens.  (Four team colors...seriously, Ravens??) 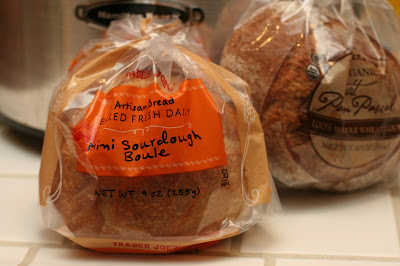 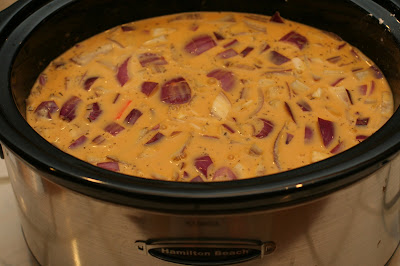 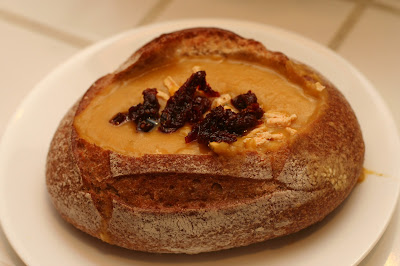 A couple of notes: my soup came out a darker yellow than I had anticipated due to the dark, rich organic vegetable broth that Trader Joe's sells.  I love their flavorful broth.  If you want a lighter color, I would reduce the amount of vegetable broth and substitute some plain water or your favorite unsweetened safe milk instead.  Using Russet potatoes might help to tone down the color.

I have to mention that my kids were protesting about having soup for dinner.  Groans and ewww's abound.  I guess the words, "potato soup" aren't what gets little boys running to the kitchen table with excitement.  However, once I took out the knife and starting carving openings into the bread, they were completely enthralled.  "What are you doing, mommy?  What's that?!?"  I told them that the soup would be served in a bread bowl, a bowl that they could eat, too.  Both of my boys did a complete 180 on the soup and happily greeted dinner.  I did have to cut their mini-bowl in half because there was no way the kids could drink and eat that much soup and bread.  They still absolutely loved their half-bowls with my eldest Ryken declaring, "Mmmm, the soup is actually pretty good."

Now if I could only serve all their meals in an edible container...