Until this year, I think the kids still truly believed that Valentines Day was all about spending a few weeks creating lovely tokens of friendship for their classmates, and not about candy.  We thankfully still had the homemade cards, which I was so grateful for.  In fact, it was Addi's first year exchanging Valentines cards, and when the morning came, she got a bit teary-eyed over the thought of parting with her 30 painted and glittered hearts.

Back at home, with all of her cards scattered in front of her, some ripped open envelopes (why is it so difficult for children to open envelopes?), and a pile of lollipops, chocolates, and other confections, I finally relented and gave her a lollipop.

And then there were two.  Two holidays she now associates with getting a piece of candy.


As for my MFA (that would be Multiple Food Allergic) boys, I was rushing around the kitchen at 8 am on Valentines Day trying to whip up chocolate cupcakes, only to discover I was low on pantry staples like flour and sugar.

In a pinch, I dug out one of the mixes I'd picked up at the Gluten & Allergy Free Expo last weekend.  We are not gluten-free, but we do avoid egg, dairy, and all nuts (except coconut), and it was really eye-opening to sample lots of products that were free of the top 8.  I am a gluten-free novice, but found the cake at this booth so incredibly rich and delicious that I had to buy a bag to see for myself.

In a blind taste test, I would've never guessed that the Pure Pantry Wholegrain Dark Chocolate Cake Mix was anything free.  How they managed to get such a moist, rich, and delicious cake with a true dark chocolate taste out of this mix is beyond me.  To prepare it without egg, I used Ener-G Egg Replacer according to the directions.  I also opted for coconut oil, as I had used it in Irene's brownies, and was impressed by the results.  I liked how the directions included dietary modifications, and some recipes for frostings. 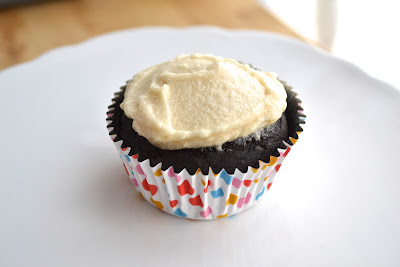 I topped the cupcakes with an egg and dairy free cream cheese frosting that I made with soy cream cheese, powdered sugar, and vanilla extract, but quickly found that the frosting wouldn't hold up without remaining chilled.  Nevertheless, frosting-less cupcakes were a hit with the boys, as well as with my littliest sweets monster.  We've been frosting them and gobbling them up for dessert in the last few days.  I've managed to eat my fair share of the two dozen I baked, telling myself I'm doing it for the good of the team.  :)

In the end, I think the spirit of card-making and giving still won out over the candy.  Addi's lollipop was never even finished before it was dumped into the compost bag, and, even after the candy came and went (into the compost bag alongside a half-eaten lollipop), the cards and memory of a day filled with love remain.

I hope you and yours had a fabulous and safe Valentines Day.
Posted by Sarah C. at 9:00 AM